The pilot phase of the Automated Construction Permitting System, branded DevelopTT, was initiated in March  2020. The first month of the DevelopTT pilot saw the system accepting Digital Planning Permission Applications which fell within the boundaries of the Port of Spain City Corporation (T1M Planning Region). The pilot will extend to the Diego Martin Regional Corporation and portions of the San Juan/Laventille Regional Corporation boundaries in months two and three of the pilot.

In Part Two of “An Inspector’s Cut”, Deoraj Ramtahal, Chief Building Inspector at the Port of Spain City Corporation, continues his chat with the Ministry of Planning and Development, while fellow Building Inspectors, Juma Lessey and Riyaz Ramkissoon, give their own take on the DevelopTT platform and the possible benefits available to members of the public.

MPD: How has your experience with the DevelopTT system been thus far?

Ramkissoon: I’ll say my experience with the DevelopTT system thus far has been pretty positive. I’ve been to the trainings and a lot of the meetings in terms of sorting out the workflows for the different agencies in the system.

It’s positive that the system is coming on board now. I won’t say it’s bug free but it will be coming on board with more fluent workflows. From what I’m seeing this should be a faster process in terms of getting faster approval. DevelopTT will allow more transparency for applicants. They will be able to get faster feedback from the corporations and have better interaction with the building inspectors.The interaction with the system has been a positive experience thus far and I look forward to the pilot project.

MPD: What are the possible impacts this system can have on your everyday functions as a Building Inspector?

Lessey: As with life, technology tends to help improve processes. With the addition of this new technology to the process, we’ll be doing a lot of the work in virtual reality. One, it wouldn’t be as bulky with the set of extra paper.

It would have a green effect on the environment, as small as it is, we’ll be using less paper. That’s one issue. But on a larger scale, we’ll be able to access large drawings easier and in real time, real space. We’ll be able to process pictures easier as the DevelopTT project progresses. DevelopTT will enable us to issue all our certificates and permits in a more efficient manner. I see it as a positive. DevelopTT will only help enhance better practices within the organization for the approval and building process as we go forward.

MPD: What message would you give to members of the public who may be a bit sceptical about the implementation of this automated system?

Ramtahal: This system has been developed based on international and tried and tested systems. Obviously, our system is a bit unique in terms of the different agencies incorporated. It has taken a pretty long time getting to this stage and the reason why it has taken that length of the time is because of all the discussions around the pertinent issues such as the timeframes we’ll be working with and the standards to work by. One of the major things here is to improve the timing of the approval process.

There is always scepticism when a new system is coming on stream to the Trinidad and Tobago public. I can safely say that a lot of effort and planning has gone into this and we have looked at different issues that can pop up. That’s why we have this being done through a pilot process.

We can assure the general public that their plans will not be delayed because of the new process. Any applicant that’s applying now and is going through the automated process, we can guarantee that their plan will be approved quicker than if they had gone through the manual process.

That’s the first thing. That’s one of our main goals in the pilot phase; to ensure that no one suffers as a result of the pilot. An applicant cannot say that they submitted an application in the pilot phase and it took longer than it normally would in the manual process. The applications are being monitored closely. That’s a benefit to the general public and developers that if we’re monitoring the system and we’re looking to improve on it going through the pilot, at the end of the pilot, we’d be able to assess where there were further bottlenecks and further improve on it.

Click HERE for Part One of “An Inspector’s Cut”.

A closer look at DevelopTT; An Inspector’s Cut (Part 2) 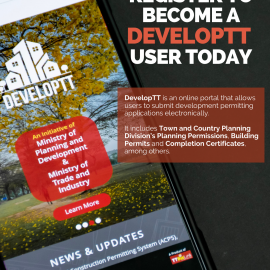 TCPD to add two new E-services to the DevelopTT platform early in 2021!